Microsoft 365 Groups may not be as recognised a name as Microsoft Teams, but it is a key component how Teams operates.

The massive increase in Microsoft Teams usage because of organisations rapidly transitioning to remote working has meant that both Administrators and the Microsoft 365 platform have had to react to ensure operations run smoothly.

The Microsoft 365 Groups Roadmap highlights the future plans and features which are being released. This article aims to highlight the items which we think are worth your attention.

What are Microsoft 365 Groups?

Microsoft 365 Groups is the membership service for more than 22 collaboration apps and workloads within Microsoft 365.  The most visible of these for users is typically Microsoft Teams, but it also includes Yammer, Stream and Planner.

Microsoft 365 Groups were previously called Office 365 Groups. This relabelling aligns the service with the wider ‘Microsoft 365’ branding across the platform.  There is no change to the capabilities and the terms are basically interchangeable.

A Microsoft 365 Group does have a few similarities (but many differences) to a traditional Active Directory or Azure AD Security Group, which will be familiar to system admins.  Although Azure AD underpins the group identity management, the relationship with the collaboration workloads is a new capability and needs to be understood to prevent issues for users and administrators.

As CompanyNet’s migration subject matter expert Stuart McLaughlin explains, there are now more options than ever for migrating your data to Office 365.

For companies who are adopting Microsoft Office 365, one of the typical activities is to migrate their ‘on premise’ data from local file stores to the cloud.

Office 365 provides a large volume of storage as part of the subscription.  This is currently 1TB (as a minimum) for SharePoint Online in addition to licensed user’s OneDrive allocation.

Reducing the cost of ownership by removing file share infrastructure or additional cloud storage subscriptions is a key benefit.  Other benefits can be realised however, whether improving collaboration and secure sharing with third parties, or using the security and compliance features for information management and oversight.

Continue reading this post…Migrating data to Office 365 – your options

With less than 12 months to go until Microsoft retires Skype for Business, we look at the options for migrating your users to the ‘new world’.

The clock is ticking. Microsoft will be ending Skype for Business support on 31st July 2021. To avoid this change impacting your day-to-day business, you must move all your users to Microsoft Teams by then.

With many organisations shifting to remote working in recent months, a great number have been forced to roll out Microsoft Teams to enable users to collaborate and communicate online. For those who were already using Skype for Business Online, enabling Teams didn’t impact the functionality of Skype. Instead, the two services continue to coexist in what’s called ‘islands mode’.

Islands is the default way for Teams and Skype to coexist, and lets users use both apps simultaneously. From Microsoft’s point of view, this is ideal, as Teams can be switched on without an organisation needing to prepare for an immediate cutover.

Continue reading this post…Time’s running out: Move from Skype to Teams now

A new daily briefing email will start dropping into Microsoft 365 users’ Outlook inboxes from this month. 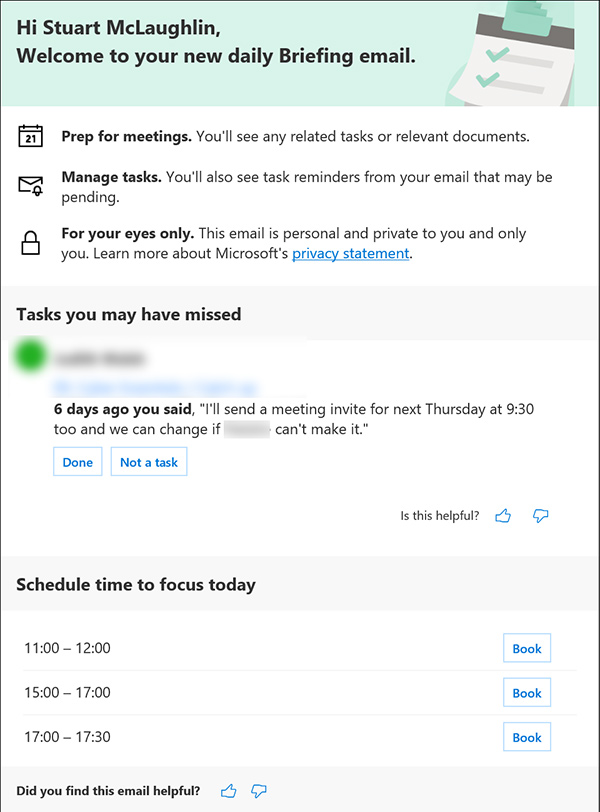 Microsoft are releasing a new feature for Office 365 users called the Briefing. This is an email which automatically gets sent at the start of each workday, giving a personalised view of the day ahead.

With insights based on the user’s own email and calendar, tasks and documents, the Briefing helps you prepare for meetings, keep commitments with tasks and actions, and block out focus time for deep work.

Sensitivity Labels are a central part of Microsoft’s information protection capabilities in Microsoft 365. They let organisations define meaningful labels for content (such as “Internal”, “Public” and “Personal”), then associate these labels with protection like encryption and visual markings.

Sensitivity labels are applied to the file rather than where it is held, so protection can persist even if the file is shared outside of the organisation.

The Office 365 Service Health dashboard is an essential tool for checking whether there are any incidents or advisories happening across Office 365 that might be affecting performance.

Although the dashboard itself is user-friendly, it comes with several limitations: only people with administrative roles can access it, and it requires admins to check the dashboard regularly, rather than any ‘alerting’ functionality being available. 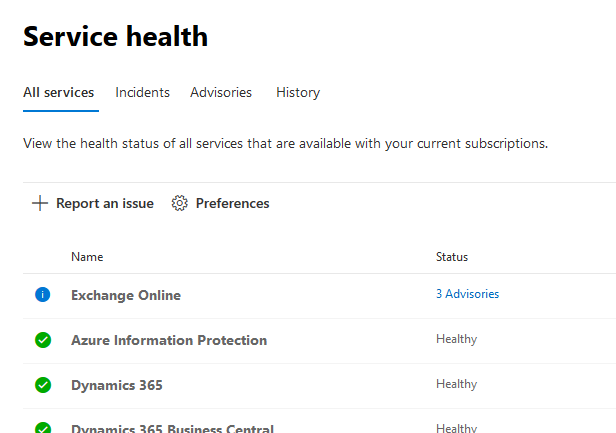 The impact is that it’s difficult to proactively spot issues and notify users of them unless admins continuously monitor the dashboard.

This issue is being addressed with the introduction of email notifications from the Service Health dashboard. This long-awaited feature lets you configure email addresses to receive alerts, so admins can receive notifications on the channel which is most convenient for them.

Microsoft are getting ready to introduce a new tool to help you migrate on-premises SharePoint data to SharePoint Online. Our Solution Architect, Stuart McLaughlin, takes a look at what’s in store.

The SharePoint Migration Tool (SPMT) has been around for a few years now, available to all Office 365 customers. It helps IT administrators to migrates files from SharePoint on-premises document libraries or regular file shares to SharePoint Online.

Although it was initially quite limited (and a bit unstable), there have been significant improvements in the years since it was launched.

In the meantime, third-party migration tools such as ShareGate Desktop have provided a richer user interface. They are still arguably better at complex migrations, although the SPMT can be considered alongside them when evaluating migration tools.

Migration shouldn’t cause you a migraine. Here’s how you can avoid the biggest pitfalls when moving data from your on-premise servers into the cloud.

Microsoft has continued to grow its migration and cloud management capabilities by acquiring two rather similarly-named platforms, Movere and Mover, in recent months. The acquisition suggests that the migration and management of cloud data is still a really strong area of focus for Microsoft.

At CompanyNet we have been helping customers migrate their data to the cloud for years, so we have a good idea of what works, and – more importantly – what doesn’t.

Organisations migrate their data for a variety of reasons. You’ll often see “digital transformation” or “cloud first” used as a banner objective, but these don’t tell you much on their own.

There might be a number of underlying motivations for migration. For example, you might have a need to reduce spending on infrastructure. Data centres and servers are expensive to operate, and replacing physical infrastructure with cloud services one way to drive down costs.

Continue reading this post…Successful data migration – planning is the key