We’re excited to announce that Microsoft have just released the a new and improved update to Microsoft Dynamics CRM 2015, for organisations who use it as part of Office 365. The new version sees significant improvements to the user interface, making it easier than ever to navigate, browse and get work done.

As with previous cloud-based updates, Microsoft will move all users to the new version within the next three months. Improvements include an updated menu structure, greater levels of customisation, and a ‘recent items’ list for quick access to frequently-used parts of the system.

Menu items are now smaller, meaning you can view more on the screen at the same time, reducing the need to hunt and scroll. It’s also now a lot easier to customise and brand the look of CRM – the screenshot above shows a quick colour scheme and logo customisation we applied to achieve a look more consistent with our own brand.

The roll-out of Microsoft’s latest operating system, Windows 10, starts at the end of this month. Our Content Manager Taras Young takes a look at what to expect.

Ahead of its release to the world at the end of July, we’ve been getting to know the new Windows. The good news is that it’s intuitive and easy-to-use. It’s abundantly clear that Windows 10 is a big leap forward; it’s a winning combination of ‘classic’ features and forward thinking which will have a huge impact on workplaces everywhere. Here are eight things we think you’ll love about the next generation of Windows. 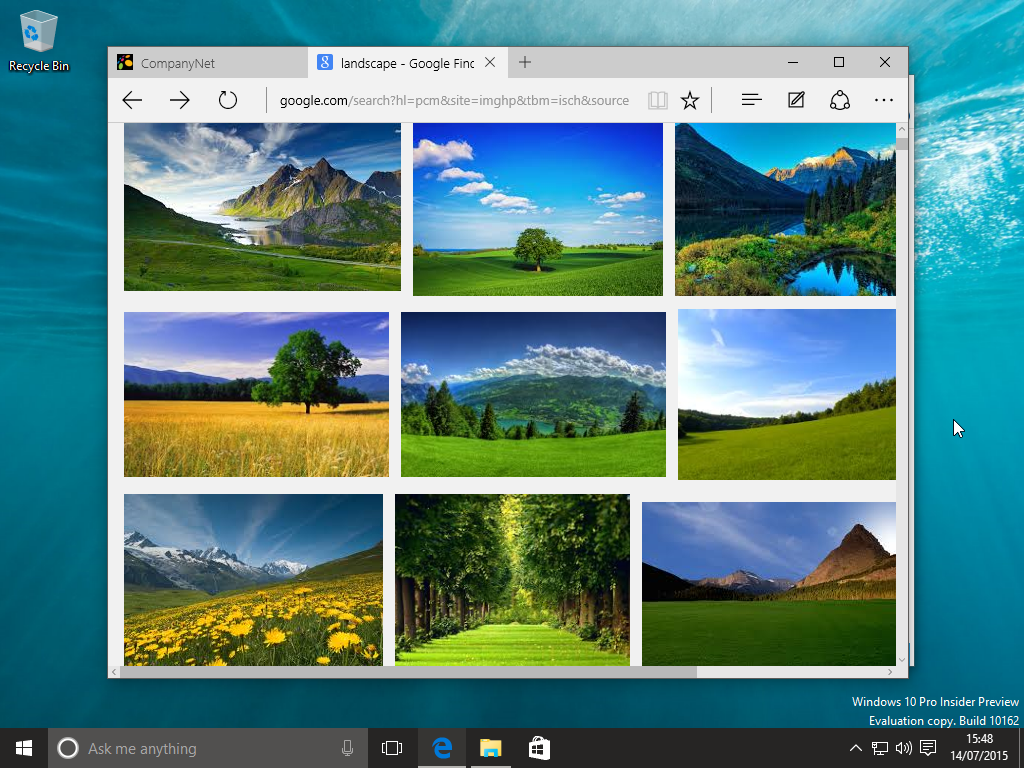 Windows’ user interface has accumulated a lot of features over the years. Windows 10 pares back some of the more cluttered parts, including File Explorer windows and the newly-reorganised Control Panel window. Search is more powerful and better-integrated than ever before, too. As well as searching your own computer, search results are enhanced by Bing to include relevant stuff from the cloud and around the web, too.

Backing up your data is a key part of any business’s disaster recovery strategy. We take a look at how Azure’s cloud backup tools could save your bacon.

Most businesses have at least considered what they’d do in the event of a disaster. Many have fully-fledged disaster recovery plans. Microsoft, through its Azure cloud platform, now offers several services that can play a key role in any business’s backup and disaster recovery strategy.

Azure Backup – Microsoft’s core service in the cloud backup area – has developed into a very mature product, and continues to evolve. Used together with System Centre Data Protection Manager and Azure Site Recovery, it provides you with a powerful set of tools that can scale from a few servers to several offices’ worth.

A year after taking on our first apprentice, HR Manager Aisling MacDonnell looks at why it was a fantastic decision.

One year ago, we took a leap into the unknown – for CompanyNet – and hired our first modern apprentice, Andy Scott. It’s fair to say that we haven’t looked back. Now, in Scottish Apprenticeship Week, we’re very excited to announce that we have been named mid-sized Apprentice Employer of the Year, with Andy coming runner-up for Apprentice of the Year.

Back in 2013, Microsoft made a commitment to have a minimum of 2,016 new young apprentices in Scotland by 2016. By launching this initiative, Microsoft took a very clear stance in encouraging employers and young people to embrace modern apprenticeships in the workplace.
We interviewed several great candidates, but Andy’s drive and passion for technology was clear to see from the moment he stepped into the room. His outgoing personality, coupled with his innovative and forward-thinking approach to sector, immediately won us over.

Is your business behind the times? You might not think so, but as Danny Creasy points out, many companies still cling to outdated Office software. Why is it poor practice to rely on old versions of Office, and what can you do to get up-to-date?

We all have software packages we use day in, day out, becoming so familiar that maintaining them stops being a priority. Danny Creasey, our ‎Infrastructure and Azure Consultant, explains why – when it comes to your business’s core software packages – ignorance isn’t always bliss.

It’s easy to forget that all software has a lifecycle – particularly if it keeps on working without causing any issues. A day-to-day workhorse like Microsoft Office can become such an integral part of business life that, ironically, many companies don’t think about keeping it up-to-date.

For our first blog post of 2015, Katherine Hamilton looks forward – five years forward, to be exact – to the office of 2020, and what it might look like.

It’s an idea that has been floated by Microsoft, and has really interested us lately. A lot can happen in five years, which means the possibilities for what our daily working lives might be like in 2020 are endless.

Working in the IT sector has never been more exciting. Every day it seems as though we are embracing new technological innovations which truly have the potential to revolutionise the way we work and interact with each other. With the rise of social media and mobile technology it only makes sense that tomorrow’s office will need to adapt to remain effective.

So what will the Office of 2020 look like? Here are five suggestions:

For companies who want the benefits of the cloud but want or need to keep their data in-house, the hybrid cloud may be the answer. CompanyNet’s Katherine Hamilton looks at this ‘third way’.

We all want the best solution for our business when it comes to upgrading technology, and recently there’s been some talk about the hybrid cloud as a ‘best of both worlds’ solution. Indeed, it’s becoming obvious that the future of enterprise IT is heading in the hybrid direction, with a mix of on- and off-premise services being preferred to an all or nothing approach.

Reading Time: 5 Minutes The cloud is increasingly becoming part day-to-day life. Katherine Hamilton looks at the implications for SMEs and what options are out there. Photo: One Cloud? (Original) by Ricardo Liberato, used under Creative Commons Private Cloud vs Public Cloud vs Hybrid Cloud Once upon a time talking about clouds was just another … Read more

Reading Time: 4 Minutes What is data privacy, and what are companies doing about it?  Andy Hamilton, Managing Director of CompanyNet, looks at the issues and considers the implications for the cloud. Photo: DSC01245 by Tom Page, used under Creative Commons Data Privacy vs Data Security During a number of conversations recently, I have been … Read more

As CompanyNet adopts a new look and a new slogan, Amie Stevense thinks about big data, working in collaboration, and the application of collective intelligence

Find out more or adjust your settings.

This website uses cookies so that we can provide you with the best user experience possible. Cookie information is stored in your browser and performs functions such as recognising you when you return to our website and helping our team to understand which sections of the website you find most interesting and useful.

Strictly Necessary Cookie should be enabled at all times so that we can save your preferences for cookie settings.

If you disable this cookie, we will not be able to save your preferences. This means that every time you visit this website you will need to enable or disable cookies again.