First Minister Nicola Sturgeon visited CompanyNet on Tuesday morning, where she spoke to our apprentices and learned how we’re supporting the digital transformation of Scotland’s economy.

She paid an early-morning visit to CompanyNet, and its SQA-accredited training subsidiary The Knowledge Business, both headquartered on George Street. 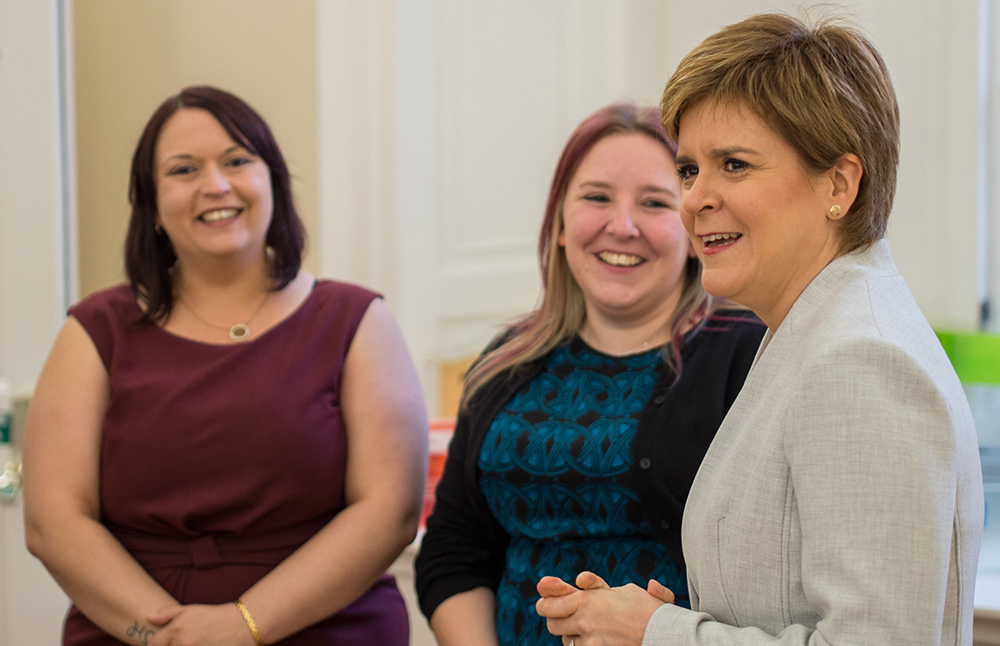 During her visit, the First Minister met with current and qualified CompanyNet apprentices, and took part in an interactive training session in The Knowledge Business’s state-of-the-art training centre.

Andy Hamilton said: “As CompanyNet, a significant proportion of our work helps public sector organisations – such as the Scottish Housing Regulator, Scottish Water, Registers of Scotland and the Scottish Government itself – embrace digital transformation.

“However, like much of the IT sector, we’ve long battled with the significant shortage of skilled staff. By creating our own training organisation in The Knowledge Business, we’ve responded to the Scottish Government’s initiatives and guidance from Skills Development Scotland, taking positive action to generate the digital skills the economy urgently needs. With our external training programme, we are also creating a path for other businesses to follow in our footsteps and become accredited training centres in their own right.

“The Knowledge Business is bringing a flow of fresh, talented people directly into the Scottish workforce. We’re achieving that through our in-house Modern Apprenticeships, and by supporting other businesses to set up and run apprenticeship schemes of their own.”

Adam Fisher, a 16-year-old apprentice currently working towards his SVQ Level 3 qualification in IT at CompanyNet, said: “Being part of a modern apprenticeship is life-changing. The Knowledge Business Modern Apprenticeship has opened up a chance for me to access a career in IT without having to gain a degree first.”

The First Minister’s visit came as she prepared to announce her ambitious Programme for Government for 2017-18. The Scottish Government aims to create 30,000 apprentices by 2020 – an ambition being supported by Microsoft and its Scottish partners including CompanyNet.

Watch part of the visit on BBC Reporting Scotland below.