Dating back to 1962, the Diffusion of Innovations theory recognises different communities within any social system – from ‘innovators’ to ‘laggards’. Based on this model, a group of users is likely to contain its fair share of ‘innovators’ and ‘early adopters’. But those communities will only ever represent 16 per cent of the user base. 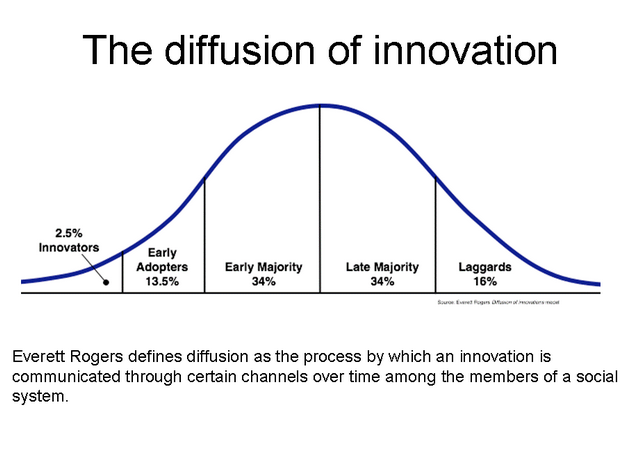 Poorly-managed, IT-imposed change may resonate with that enthusiastic minority of the user base which is highly receptive to change and innovation. But what about the significant majority, who are likely to be ambivalent, at best, about the change? And what about the ‘laggards’, who will be strongly resistant to the change being imposed on them?

Do it with your users, not to them

Decades ago, Business Analysis emerged as a well-intentioned discipline to connect the technology capability with the needs of the users. But, all too often, the result was an overblown specification – long on detail and packed with esoteric technical terminology. The specification may ultimately have been delivered to the letter, but it missed the mark because users didn’t understand what was being specified on their behalf. Empathy with the ordinary user was lacking; IT and the business were speaking different languages.

The trend towards more agile methods has grown partly out of this deficiency. These approaches are deliberately visual, in order to engage with the user community more directly. They are also deliberately iterative, to engage those users earlier in the process, allowing time for refinement through subsequent iteration.

In recent years, emerging disciplines such as UX (User Experience) have helped, too. They’ve started putting the user community right at the heart of the action. They’ve involved them directly in the design and development process, iterating based on user feedback, with the intention that the resulting solution is more tightly-aligned to the needs of those users.

Adoption in the cloud

In today’s world, where we’re all being shepherded towards the cloud, the concept of user adoption becomes more important than ever. And that’s because it’s inextricably and directly linked to the commercial model which underpins the cloud – that of subscription.

A generation of partners once existed to build and develop applications on the Microsoft ‘stack’. The more enlightened ones used Business Analysis, Agile and UX techniques in a bid to align their solutions with the needs of the users, thereby promoting user adoption as a hallmark of a successful implementation.

But these days, SaaS (software as a service) offerings such as Microsoft Teams and Yammer don’t need any building. Microsoft has already done that for us.

The role of the partner is now increasingly about getting those workloads adopted. Microsoft is pushing it hard because its future commercial model depends upon it. It’s no surprise, then, that Microsoft’s partners are being incentivised to drive that adoption on the software giant’s behalf. And so the industry has finally woken up to the fact that it needs to actively engage with change management in order to drive adoption.

The cynic may conclude that the motivation is commercial and self-interested, rather than purely altruistic. Either way, it remains true that the user is a happy beneficiary of this increased focus on user adoption.

So, we’ve established that, if a new implementation is to be well-adopted, we need to put the users at the heart of the change process. Those users need to be consciously and deliberately engaged in the process as active participants. That doesn’t just mean involving them as an afterthought, by dropping them into a last-minute training session the day before launch; we need to bring them on the journey with us, right from the start.

At CompanyNet we use Prosci’s ADKAR Change Management model. Other methods are available – but we find ADKAR to be a clear and logical approach. It is based on good, old-fashioned common sense, and it aligns well with a software solution implementation lifecycle. 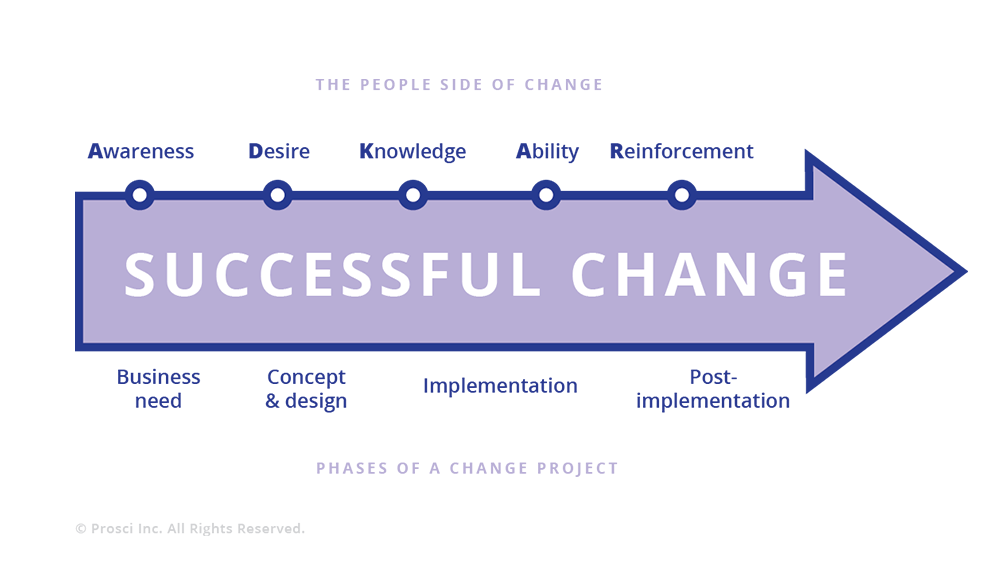 Specifically, we build Awareness, Desire, Knowledge, Ability and Reinforcement of the change – with specific activities throughout the implementation lifecycle, and beyond.

So, what does an ADKAR change programme actually look like?

Naturally, it will vary dependent on the implementation. But here is a starting point:

Pop-pickers will remember that, back in 1982, while The Fun Boy Three and Bananarama were enjoying pop success with ‘It Ain’t What You Do…’, another act was forming. They were called ‘Go West’. And they weren’t very good.

From a Change Management perspective, I’d recommend that you set your compass to head in precisely the opposite direction instead: EAST.

ADKAR works on an individual, behavioural level. It’s about people change, affecting the way that people respond to change. To this end, EAST gives us a simple method for applying behavioural insights which affect positive individual change:

So, what does it mean, and how do we apply it in practice? Well, here’s another pearl of wisdom from our song to underline the point: “You can try hard, don’t mean a thing. Take it easy and then your jive will swing.”

Here are a few examples of how we’ve applied it at CompanyNet for the benefit of some of our customers – and their users:

People are inevitably drawn towards the ‘path of least resistance’. And people are physiologically hard-wired to fall back to old ways of working. If we can minimise friction and resistance in taking up a new service, and convince them of the benefits, then people are more likely to engage with it, rather than seeking out alternative routes to the same end.

But to provide a ‘least resistance’ environment for our users, we first need to be empathetic to their needs. Empathy with our users is the cornerstone of methods like ADKAR and the application of behavioural insights as with EAST.

People are instinctively motivated by the concept of WIIFM – What’s In It For Me? So, we need to align the intended change with those personal drivers, and describe it in those terms. To do that, we first need to understand what will motivate the people. It doesn’t matter how well-intentioned our change programme is, nor how diligently we follow the models and the methods. Without user empathy it will surely fail.

It ain’t what you do, it’s the way that you do it. That’s what gets results.

If you’re interested in finding out more about what we do (and the way that we do it), read some of our success stories or get in touch.