Learn how Registers of Scotland and the Scottish Housing Regulator delivered digital transformation by empowering their businesses and allowing ingenuity to flourish.

Picking up a theme from an earlier blog article, What is Digital Transformation?, this recent observation from Tom Meade, Digital Director at Registers of Scotland, really resonated with us:

Almost 3 years ago, Registers of Scotland (RoS) approached CompanyNet with a business problem. A significant legislative change to the Land Registration Act had just been announced. This mandated that Registers of Scotland must allow a defined set of Land Reports to be transacted online with its community of eServices business to business customers, by a fixed statutory deadline in December 2014. The deadline became known within RoS as the “Designated Day.”

This legislative change had forced RoS to seek out a digital solution to deliver this statutory requirement. And so the Reports Portal service was born.

For RoS, it was an early foray into digital transformation, and a pre-cursor to its three-year digital strategy, which formally launched in the spring of 2015.

Since that first venture, RoS has become increasingly comfortable with this new mode of transformation and the new possibilities and opportunities which it opens. Back in 2014 though, there was a sense in which the change was being forced onto the organisation – that the business was, at least initially, something of a passive participant in the process; that the ‘digital’ nature of the solution had been mandated to it through the legislative framework by which it is bound.

RoS faced down the challenge which had been imposed upon it with determination and hard work. The incredible effort demonstrated by the organisation’s staff as they delivered to the deadline was recognised on a framed plaque which was mounted on the wall of RoS’ Edinburgh office. In this tribute, Chief Executive Sheenagh Adams called out a number of ingredients which had contributed to RoS’ success. These included hard work, co-operation, commitment, enthusiasm, determination and even good humour. 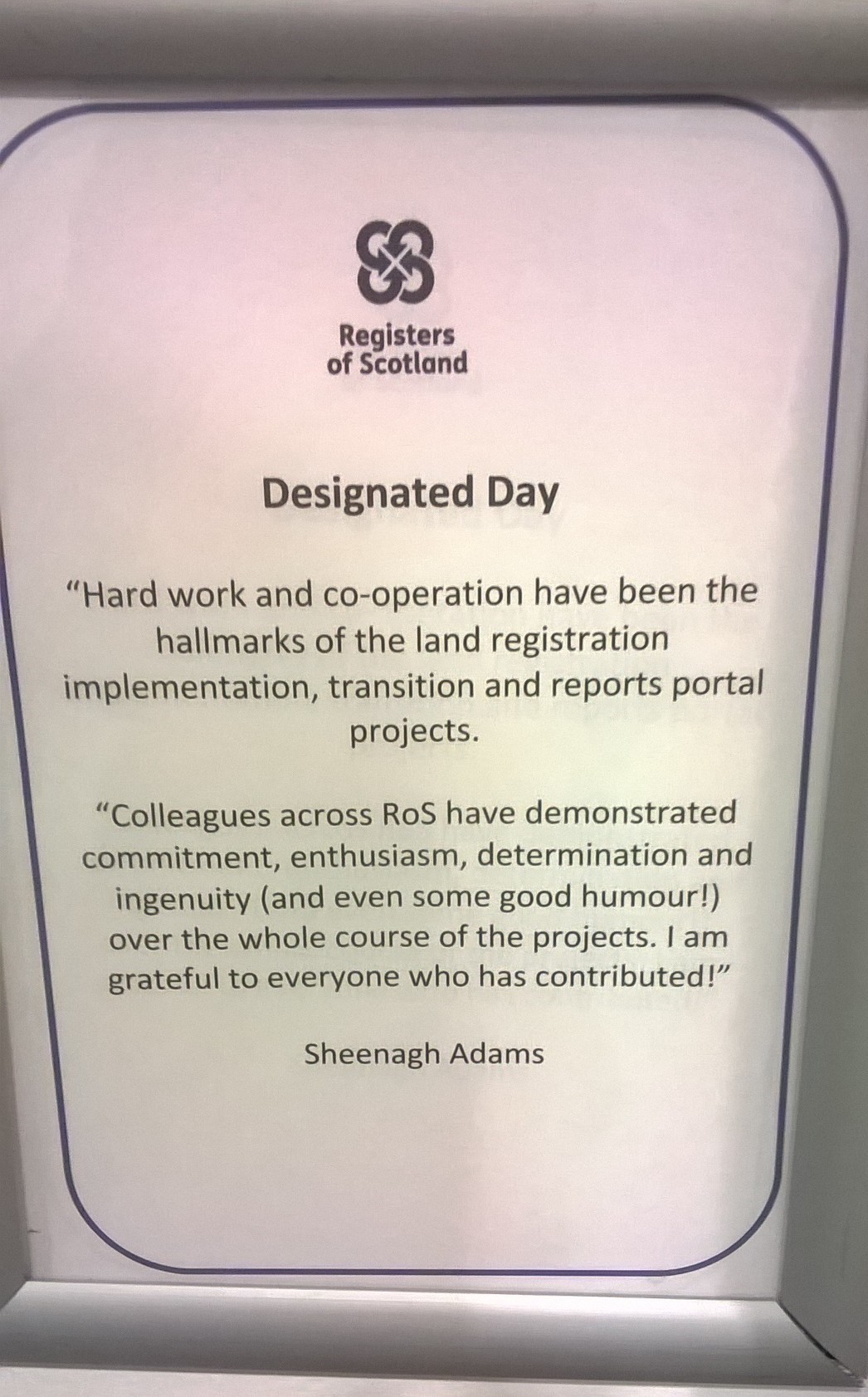 But one word particularly stood out. Ingenuity.

With the benefit of hindsight, the Reports Portal played an important role as a catalyst for RoS. It helped it as an organisation to mature and fully embrace the potential for genuine organisational transformation which these new digital tools and platforms offered.

Business at the heart of transformation

Since the “Designated Day” was successfully delivered, the business has increasingly placed itself at the heart of the transformation. It has become an active agent, leading the change and identifying new opportunities for improvement, supported by RoS’ IT function.

Examples include the further extension of the Reports Portal to incorporate a wider range of reports, such as the Plan Assistance Service; and RoS staff identifying improvements to back-office processes, with those changes implemented to make the whole operation slicker and more efficient than ever.

Sheenagh Adams reflects on the progress made over the last three years:

“We’re turning business around quicker than we have ever done. When I joined the organisation there were cases sitting on the shelves that were years old, literally. Now, 80% is coming in and going back out the door again in two days.”
Sheenagh Adams, Chief Executive, Registers of Scotland, ‘After 400 years, the sprint’

There are strong parallels between Registers of Scotland’s transformative experiences and the pioneering change which the Scottish Housing Regulator (SHR) led over an almost identical timeframe.

The main driver for the Scottish Housing Regulator’s Business Intelligence System was also legislative. A change to the Housing Act required SHR to provide an online solution to collect annual data returns from each of Scotland’s 200 social housing landlords, as well as from Scotland’s 32 local authorities. In the past, SHR had collected paper returns. It was a time-consuming and error-prone business, both for SHR and for the landlords it regulated.

Like RoS, SHR had a hard, statutory deadline to work to. The new online Annual Return of Charter (ARC) service had to be fully operational by 1st April 2014 – SHR’s very own “Designated Day”, to borrow from RoS’ parlance.

As with RoS, the initial transformative change was being imposed on SHR. The legislation was the active agent of change, and the organisation was forced to react to it.

For SHR, the big difference over RoS was that there was no in-house IT team to help the organisation get to grips with the transformation being thrust upon it. Its day-to-day technical needs were outsourced to a shared central service which the Scottish Government provided, so SHR looked to an independent programme of work to deliver the transformation.

In many respects, and perhaps counter-intuitively, SHR was able to use this to its advantage. Out of necessity, its hitherto ‘non-technical’ staff became even more integral to the transformation process right from the outset – expressing its needs, understanding what its new digital platform could offer, and identifying opportunities for further improvement from day one.

The ARC return was presented to users through an online portal, as a series of intuitive and interactive form fields. Immediately, SHR was alive to the possibilities which this created for effective data validation. In a stroke, the process of completing the return was simplified for the user, in this case the social housing landlord. They were prompted when the data they had entered was incorrect, or did not calculate properly, or was illogical based on a series of pre-defined rules; they were offered context-sensitive guidance notes to help them understand what was being asked of them.

None of this had been possible in the ‘old world’, pre-transformation.

It was a simple, but highly effective, scenario. And it was business transformation in action – using the capabilities of a digital platform to improve the business process, and the experience for all participants in the process, for the better. Previously, SHR had employed a team of temporary staff to manually enter the results from the paper forms. It took over a month; the process was still prone to manual input errors from the temporary staff, and the results were not available to the organisation for analysis until all the data was in.

The ARC data return was online by 1st April 2014, meaning SHR had met its statutory requirement.

The transformation didn’t stop there, though. SHR’s ultimate remit is to safeguard and promote the interests of the tenants of social landlords, rather than the landlords themselves. To that end, the organisation decided to take advantage of the capabilities of its new Business Intelligence platform.

Much of the data SHR captured through the ARC returns was published in the public domain. An online comparison tool allowed tenants to compare one landlord to another, based on a series of performance indicators – such as time elapsed to carry out a repair on a property. This empowered tenants, giving them an objective basis on which to complain to their landlord in the event that their landlord’s performance was lagging behind the norm. In turn, this made the landlords themselves more accountable and more aware of their own performance, introducing a degree of healthy competition among the community of social landlords.

Some of the more sensitive information which SHR had collected from the landlords was retained securely by SHR. This is routinely analysed as part of SHR’s ongoing risk assessment process. It allows SHR to proactively monitor landlord performance and financial trends, and act on indicators based on financial, governance, housing quality and service quality. The intelligence gleaned by SHR from this information drives action, enabling problems to be pre-empted, and work to be carried out with the landlord to mitigate any risks. For example, the system can identify a landlord whose financial profile indicates a trend towards liquidity problems, or one who shows a reduction in the rate at which repairs and fixes are being applied their social housing stock.

As SHR’s staff grew more comfortable with the possibilities which its new technology platform offered them, the scope and reach of its transformation grew to underpin the organisation’s entire remit. Over the course of four years, SHR has harnessed the potential of technology to transform its whole way of working for the better.

“The business intelligence programme remains wholly consistent with the SHR’s policy and business objectives … an integrated business system to support the Regulator’s core business functions will allow them to both address current business risks and position the organisation to more effectively deliver on its objectives.”

Key to the transformation was the speed and willingness with which SHR’s staff embraced the change, recognised the potential opportunities it provided, and felt empowered to turn positive thought into practical action.

“What we valued most about the solution was its self-sufficiency. CompanyNet leveraged CRM’s customisability to produce a straightforward-to-use, platform-based solution that gave us a foundation to revolutionise the way we work.”

SHR’s staff were demonstrating the same “ingenuity” which was such a strong ingredient in the transformation at Registers of Scotland. When mixed with a strong sense of empowerment among business staff, it becomes a potent combination which puts the business front and centre of the change, rather than leaving it a passive recipient.

We are witnessing the business deciding what it wants to do with its IT capability – true business transformation. The last word goes to Tom Meade of RoS:

“The technology we are building and how we are delivering it is really leading edge and it’s very empowering for those working on it; it’s based on the teams deciding on the best way to make it work.
Tom Meade, Digital Director, Registers of Scotland, ‘After 400 years, the sprint’